The Syrian war has not diminished after six years but, rather, human rights violations against the Syrian people have become more widespread and millions of Syrians are living as displaced people and refugees all over the world. In addition, extremism has spread as the result of the intensity of repression practiced by the Syrian regime against its people.

This statement is the first statement by the Syrian Civil Society Platform (SCP) to the Russian Federation, which is the main supporter of the Syrian regime in international forums. The SCP recognizes the concerns of the Russian Federation about possible outcomes in Syria, especially regarding international laws and regulations.  On the other hand, the Russian Federation is aware that the actions it takes to protect the regime contribute to perpetuating the occurrence of massacres and ongoing human rights violations against Syrian civilians, the latest of which was the strike on Khan Sheikhoun with sarin gas. Preceding this one there were three strikes with poison gas, with the involvement of the regime verified by international investigation committees.

With Russia’s use of this eighth veto in the UN Security Council against a resolution whose purpose is to hold human rights violators accountable in Syria, it loses the neutrality it claims, and thus its credibility as a guarantor of any future agreement. It also raises the question of what kind of justice Russia seeks to achieve and what kind of values Russia is trying to establish in the international community.

We therefore appeal to the Russian Federation based on the values of human rights and respect for international humanitarian law:

Finally, the SCP confirms that the long-term interest of the Russian Federation must lie in protecting the Syrian people rather than the Syrian regime. 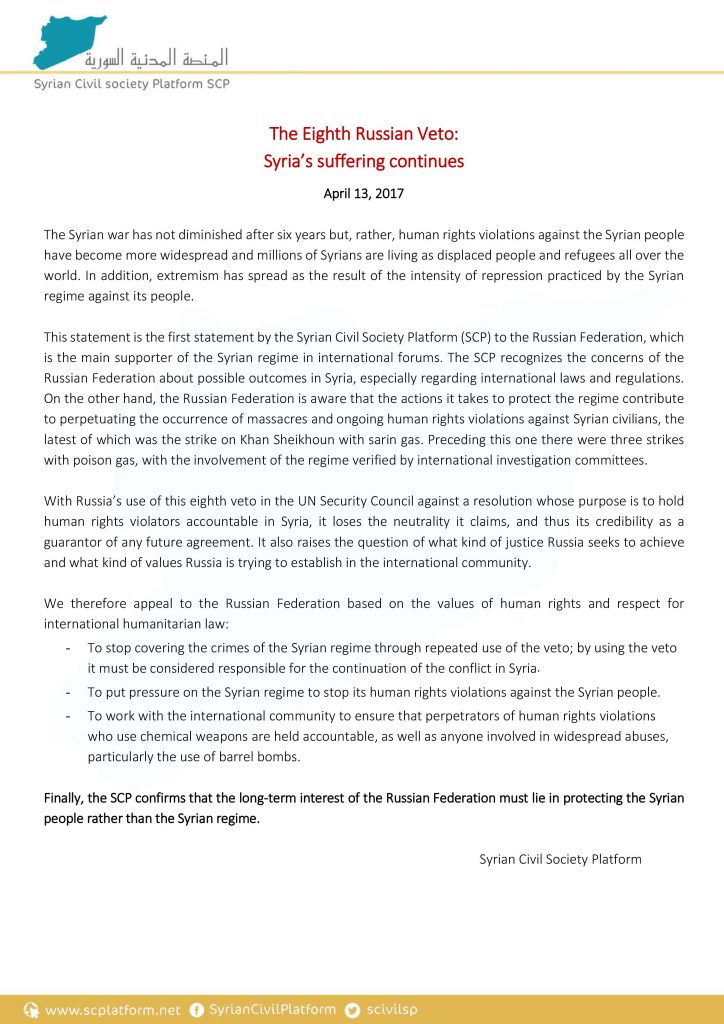